Today is World Cancer Day. And the day after I learned my brother Jim was recently diagnosed with Stage IV colon cancer.

Once again I'm registered to ride RAGBRAI (the weeklong bike ride across Iowa) this July with Team LIVESTRONG.  Riding with this group us an amazing experience. I'm honored to be a part of this team.  The LIVESTRONG Foundation provides support for cancer patients and their support team (family, friends, and professional care takers). To do its work, the Foundation relies on the support of donors ... like you.

In the past, I've ridden RAGBRAI in memory of my sister, Julie, who was taken from us in 1982 when she was only 21.
This year, I will again be riding in her memory.

And in honor of my brother Jim. Jim is one of the nicest, most genuine, and incredible people I know. A Renaissance Man. Artist, Artisan. Iron worker, Computer programmer. Thinker, Doer. And, at age 57, cancer fighter.
﻿

At the top of my blog page, there's a LIVESTRONG Foundation logo that is linked to my fundraising page. Please follow that link and donate to the Foundation. In Jim's honor. Or the honor or memory of a loved one.

As for me, I plan on pedaling 418 miles across Iowa in July. Thinking of Julie. And Jim. Sharing their stories. And raising awareness of all that LIVESTRONG does. And donating as well. Until then, I'll be training. And fundraising.

Thanks in advance for your support.
Posted by Bob Rides A Bike at 8:38 PM No comments:

Out With the Old, In with the New

Until September, it was,I thought, a pretty good year on the bike. I rode a number of events,including RAGBRAI, the UPAF Ride for the Arts, and the Wisconsin Triple Crown series. Since mid-Sept, I haven't been on the bike. (Long story, not for here.) At least until the new year. I've been on the trainer three of the first four days of 2014. And I can feel the layoff in my legs and lungs.
By far, the most challenging thing I did was the Triple Crown. Ever. The three rides, in Arcadia, Viroqua and Dodgeville were seriously hilly. The first two had some really steep climbs (that I had to walk up!). But I completed the three rides and earned my jersey. I was REALLY looking forward to riding it again in 2014. I wanted to make it up those hills. And ride longer distances. Then, on 12/30, I got an e-mail from the organizers that they are discontinuing the series and not running two of the events (Arcadia Brute and Kickapoo Kicker [Viroqua]). My guess is there is some personal/family issues with the one group of organizers. The Dairyland Dare (Dodgeville) ride is still a go. And I'm going for it!
Looking ahead to 2014, I am looking at some of the same rides: Minnesota Ironman Ride (late Apr), Ride for the Arts (early June) and Dairyland Dare (mid Aug). The big question mark is RAGBRAI. It's a week long ride in late July. That's a long time to be away from home. And it's right around the time of the audit at work. (Since I'm the business official of a public school district in WI, so it's kind if a big deal.) I'll have to see how things shake out. I do love it. But I hate being gone that long.
Whether or not I ride RAGBRAI, I plan to still fundraise for the LIVESTRONG Foundation as part of the team. (If you want to get in ahead of the crowd, here's my fundraising page if you want to make a donation: http://www.livestrong.org/fundraising/avery2014/)
So, for 2014, I'm going to ride as many events as I can. I hope to ride 3000 miles (including trainer) and be on my bike 250+ days this year. I'm also going to try (again) to be more diligent about updating this blog. Perhaps expand the scope of the blog to beyond just my riding adventures: updates on pro cycling, including women's cycling; commuting information (even though I don't bike commute any more); cycling safety; and other miscellaneous stuff.
What are your plans for the coming year?
As always, your feedback is welcome and encouraged!
Posted by Bob Rides A Bike at 11:39 PM 1 comment:

August 10th: The Dairyland Dare - Stage Three of the Wisconsin Triple Crown Series.  For serious riders, the Dare offers options up to 300km (nearly 200 mi).  Riders who are much more serious than I.  Evidence: this was my first ride since RAGBRAI.  So, I opted for the 100K route - or about 65 miles with 5,000' of climbing.
I woke up at 4:30 to get going.  It's an hour drive from home to Dodgeville.  The ride began and ended at the Lands End headquarters in town.  Nice facility.  Registration was well organized.
I rolled out with the 7:15 wave.  Riders left Lands End every fifteen minutes.  My plan was to do the 100K ride, finish about noon and head back home.  Ahhh, the best laid plans of mice and men....﻿﻿
There were about 35-40 riders leaving when I did.  Most of the riders who had committed to the longer routes (200K +) had left in the earlier waves.  Our group was mostly 100 and 150K riders.
The rider in the picture above #121_ is wearing a RAGBRAI jersey from this year.  He and I talked for a bit.  He was from Iowa City and took up cycling in 2010 because he was having knee issues and couldn't keep up with his running.  He rode the 150K.  I saw him later in the day, when the two routes crossed, riding strong.﻿﻿﻿﻿﻿ The first 50K were mostly rolling hills, and lots of them.  The cue sheet listed nine separate hills.  It was, especially compared to the first two stages of the Triple Crown in Arcadia and Viroqua, relatively easy.﻿﻿﻿﻿﻿


And then I had a little issue.  About 3-1/2 miles from the 50K finish (aka my half-way point).  I had passed a water stop by a couple miles when I started experiencing some difficulty shifting.  Then I couldn't shift at all.  So I turned around to head back to the water stop.  I was able to make most of the way back, but did have to walk up one hill.  (Side note, I was disappointed that only two riders had even asked if I was ok.  Most just rode past.)  There was a support truck there to call in for a SAG ride.  Within a couple minutes one was driving by as he got the call to pick me up.
The SAG drove me about 10 miles to the next rest stop in Governor Dodge State Park, where there were two mechanics ready to help.  They had shifter cables and repaired my broken steed.  (I forgot the guy's name who worked on my bike for me.)  I was good to go again.

The ride into the Park was beautiful, but there was a steep hill about just before the rest stop.  I decided to make up most of the mileage I lost by getting SAG'd by riding the loop through the park, about 6 miles, from the rest stop to the entrance/exit and back to the rest stop.  In addition the two miles riding back to the water stop with the broken cable, I covered about 8 of those 10 miles.
Now, on to the second 50K.  There were five hills listed in the next section of the ride.  But they were much larger and more daunting than the rollers of the first half of the day.

After rolling out of Governor Dodge State Park, there was about six miles of relative flat riding until we hit the big hills.  First was a 400' descent, and then a climb back out of the valley.  Up 200' then a slight drop and then more climbing.  This part of the ride was turning out to be brutal.
Especially for a guy carrying more than a few extra pounds.  They come in handy when going down hill, but it's like dragging an anchor going up. I am a SLOW climber.  I've since heard that each pound a rider is overweight cost him/her 15 seconds for every mile of climbing. If that's true, I lose about 5 minutes each mile going up.
﻿ The route was well supported, not only with the SAG support, but also with full stocked rest stops with mechanics, and also water/snack stops.  The route was well marked and the volunteers and staff were awesome!﻿
After the last stop, there was one more hill (technically it was two) before the finish.  Not as severe or as long as the others.  But after fighting the others, it was no less challenging on my tired legs.  So I did what my jersey said - I fought head down.  (Jersey was our LIVESTRONG team jersey for RAGBRAI.)
Finally, after over six hours, I rolled back into the Lands End complex and finished the Dairyland Dare and the Wisconsin Triple Crown.

And the reward!  A cold pint of Capital brew.  ﻿﻿
While I was enjoying my beer, someone called my name and was walking towards me. It turned out to be a teammate from 2011 Team LIVESTRONG, Amy.  We had talked about connecting at each of the stages of the Triple Crown, but never connected.  So, at the end of the last day, it was a little ironic that we actually were able to reconnect.
Riders who complete the Triple Crown receive a personalized jersey commemorating all three stages on the back pocket.  You can select what you want it to say.  Mine will be "CRAWL UP - FLY DOWN" in honor of my great skills on the hills.﻿﻿

My Strava data from the ride.
https://www.strava.com/activities/73677992
You'll note that straight line from mi 30 to just past 36. That's where I paused as I was getting SAG'd to the mechanic. I rode an extra loop thru Governor Didge State Park, which was gorgeous!) to make up for some of the list mileage. Still ride more than 100K (thanks to the loop).

The. Last. Day.
Sorry, not a lot of pictures on the way to Ft Madison. 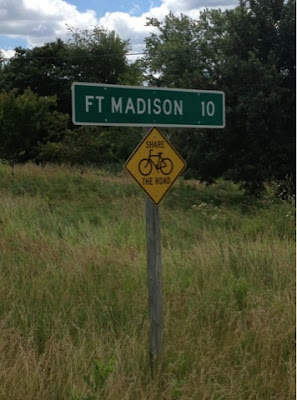 Email ThisBlogThis!Share to TwitterShare to FacebookShare to Pinterest
Labels: RAGBRAI

Email ThisBlogThis!Share to TwitterShare to FacebookShare to Pinterest
Labels: RAGBRAI